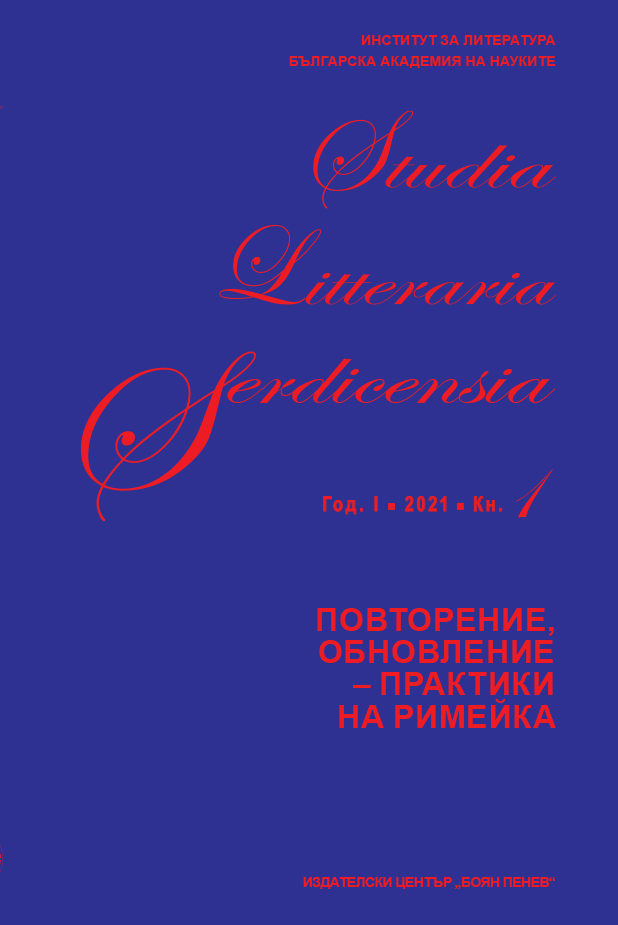 REPETITION AS A PROBLEM OF CULTURE

THE REMAKE – BETWEEN IMITATION AND CREATIVITY

LIFESTYLE TECHNIQUES IN A DIGITAL CONTEXT: FROM UNIQUENESS TO REPETITION

REMIX OR THE CREATIVE REUSE OF FOUND MATERIAL

THE TRANSLATION AS A REMAKE

THE REMAKE OF FOLKLORE MOTIVES AND PLOTS IN BULGARIAN FICTION FROM LIBERATION TO THE FIRST WORLD WAR. IDEOLOGICAL USES OF FOLKLORE

BOTEV‘S PRAYER – RETURN TO AUTHENTIC MODELS OR TRANSFORMATION OF GENRE

VIRTUAL REMAKING: TOWARDS WILLIAM GIBSON’S OPTIMISM AND PESSIMISM IN THE CONTEXT OF CONTEMPORARY PHANTOMATICS

EMILIAN STANEV―THOMAS MANN: THE DIALOGUE BETWEEN TWO WORKS – BETWEEN THE LITERARY TYPOLOGY AND THE CULTURAL-CIVILIZATIONAL REMAKE

“BABYLON BERLIN” AND THE “REMAKE” OF AN ERA